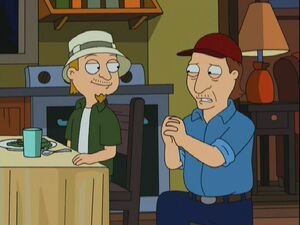 Henry Fischer is the father of Jeff Fischer, who he tries to turn in for the reward money after setting him up to get busted for drugs in "Joint Custody".

When Stan and Roger find Jeff is wanted on drug charges in Boca Raton, Florida, they pursue him to his father's farm hoping to cash in on the reward and get Jeff out of Stan's life. They are tricked and tied up by Henry who declares that he intends to turn in Jeff himself for the reward money. He also reveals a startling fact that he had grown the marijuana Jeff was found with on his farm and sent Jeff to bring it to Florida, though Jeff had been totally unaware of any of this. Stan and Roger escape but Mr. Fischer has already turned Jeff in at the Boca Raton Police Department, and openly admits that he cares more about the money than his son. Stan, however, proves Mr. Fischer's guilt, because he had been wearing a wire during his confession as he always wears a wire for his job. Mr. Fischer is taken away for the drug charge and for attempting to murder Roger and Stan.

Despite presumably going to jail, Henry appears in the audience in "Phantom of the Telethon".

Jeff mentions his dad in "The Unbrave One", noting that while his dad thinks he is an idiot, he loves Jeff's younger brother.

Retrieved from "https://americandad.fandom.com/wiki/Henry_Fischer?oldid=55254"
Community content is available under CC-BY-SA unless otherwise noted.