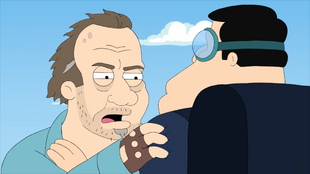 Henderson
Stan is reunited with an imaginary childhood friend.

Roger's Disguise: The Weeknd from "A Starboy is Born" 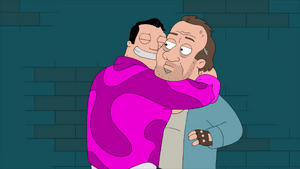 After annoying Francine by going out alone, Hank Henderson stops by, looking for Jack, who is deceased. He recounts how he was paid to be Stan's imaginary friend so Jack wouldn't have to spend time with him, but was stiffed on his payment, and demands it from Francine. Annoyed with Stan, she overpays Hank on the condition that he convinces Stan that he should take her out dancing. Catching him at the club, he follows through, as requested. But after their night out, Francine finds that she can't get rid of him, as he threatens to expose the secret that he's not a figment of Stan's imagination and insists that the payments keep coming in exchange for further jobs.

Francine tries to demand that Stan banish him, so he takes Hank skydiving and pushes him out of the plane without a parachute, where he crashes into Francine's car as she tries to stop them. Stan lands on their heels and remains completely oblivious that Hank is real as Francine goes into shock. On the drive home with Hank still on the hood of the car, Francine finally gets it through to Stan that she and his father both paid Hank to spend time with him. Stan takes the news well, as he instructs her to ditch the body. Still in shock the following Monday morning, Stan assures her that Hank has been erased by the CIA, and to make her feel better, he offers to set her up with a CIA grief counselor to help her. The counselor arrives at the Smith home and, using baseball as therapy, she leads her to believe that their casual conversation led to seven cruise missiles being launched at an Iraqi village at her command, and after thinking about it, Francine admits she really feels nothing because she had no idea it was going to happen. She further realizes that nothing she did could have stopped Hank's death, which makes her feel better. But when Stan stops by the house, it's revealed that the counselor is really a figment of Francine's imagination. 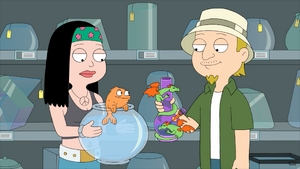 Meanwhile, Danuta's boyfriend gets killed, so Klaus thinks he has a second chance. Not satisfied with the ones in stock at Petz World that he can afford, he gets the idea of having Jeff blow him a new fish bowl to impress her after seeing his fancy hand-blown glass bong, but his initial efforts fail to meet Klaus' standards. Jeff finally makes one to Klaus' satisfaction, but pressed for time, he takes the fish bowl while it's still too hot, and during his date with Danuta, the hot bowl burns its way through the table, the floor, and into the Earth. Klaus recovers with Jeff present, where he reveals that Danuta also suffered misfortune, dislocating her jaw on a giant cheeseburger, and Jeff speculates that she might be dead. Klaus' response is to inquire if there is any of the cheeseburger left.