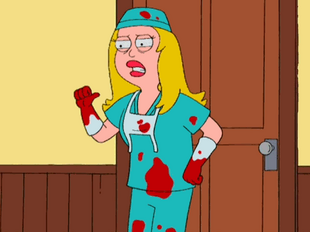 Helping Handis
Dr. Francine is in the house.

Newspaper Headline: "King Kong Told Not To Use AIDS Quilt For Warmth" 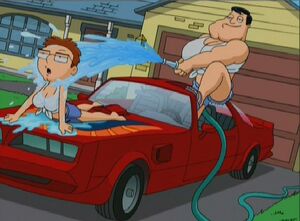 Stan tries to help Steve become more popular with the Jocks by giving him steroids from the CIA, which gives Steve breasts. Stan tells him to hide his breasts. When the kids at school find out, Steve becomes popular. Stan is disappointed at him. Steve and his new pals hang out every day. When he wants to have a party, Stan forbids him, but he has one anyway. When Stan arrives, he finds everyone lining up to touch Steve's breasts.

Stan tries to tell him that they only like him because of his boobs. He ignores him, so Stan swallows three steroids and develops larger breasts. He goes to a party whom Steve was invited and shows his breasts to everyone, who then ignore Steve and bask attention on Stan. Steve apologizes to Stan, and while they can, they play together by showing off their breasts while washing a car. 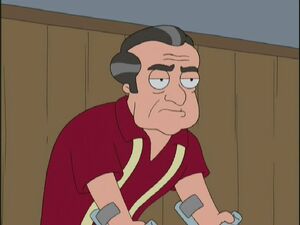 Meanwhile, after Hayley makes a video about how boring her life is, Francine hopes to become something else and is contacted by a scam organization, becoming a surgeon. But when she shows Hayley her "certificate", the latter tells her that she has been scammed, but she refuses to believe it. After being rejected by the hospital, Francine works for the Handicapped Mafia, but things turn bad when she is told there is no way out. She tricks them into to robbing the First National Bank and the police kills the mafia, to Francine's relief. When she and Hayley return home, they find that Roger, who was obsessed with cleaning the house, becomes frantic after Steve's big party and proceeds to burn down the house.