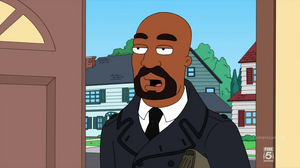 Heinrich Brown is an intimidating insurance adjuster whom Stan fears will tell Francine that he had an accident while checking out another woman in "Rubberneckers".

Heinrich is determined to discover fraud in Stan's story of the accident being caused while trying to avoid hitting a dog, and eventually discovers Stan's cell phone under the seat of Stan's SUV with pictures of the jogger when Roger calls to tell Stan the truth that he helped cause a wine stain on the couch. As a result of the fraudulent accident report, Stan is given six years in prison.

He appears as one of the players at the recreation center and asks Jackson to be his two-on-two partner in "Criss-Cross Applesauce: The Ballad Of Billy Jesusworth".

Brown is voiced by Terry Crews.