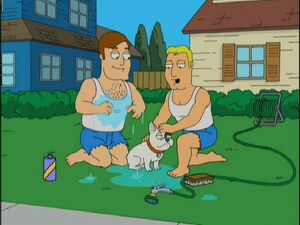 Heath Ledger is Greg and Terry's pet French bulldog, who was named after the now-dead Oscar-winning Australian actor. In "Lincoln Lover", he had a cold and was wearing a sweater.

A dog resembling Heath is seen at the SPCA in "The Full Cognitive Redaction of Avery Bullock by the Coward Stan Smith".

Retrieved from "https://americandad.fandom.com/wiki/Heath_Ledger_(dog)?oldid=86193"
Community content is available under CC-BY-SA unless otherwise noted.