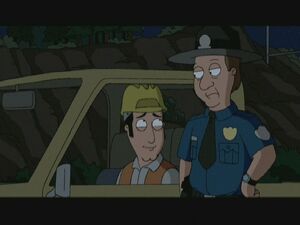 Harland is the police officer that nearly discovers Jim's secret golden turd and that he killed his friend Mikey.

In "Homeland Insecurity", when Roger reveals that he poops golden, jewel encrusted turds. Mikey and Jim discover the gold left by Roger, and Jim of the men kills Mikey. He hides the dead body in the back of his truck and drives away. He is stopped by Harland, and fears he may have been discovered, but the police officer simply talks to him for a while and drives away.

Harland is voiced by William Fichtner.

Retrieved from "https://americandad.fandom.com/wiki/Harland?oldid=58525"
Community content is available under CC-BY-SA unless otherwise noted.