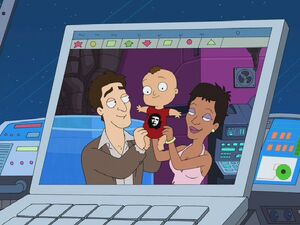 Halle Berry is an American actress, former fashion model, and beauty queen. Berry received an Emmy, Golden Globe, SAG, and an NAACP Image award for Introducing Dorothy Dandridge and won an Academy Award for Best Actress and was also nominated for a BAFTA Award in 2001 for her performance in Monster's Ball.

Halle Berry appears with Adrien Brody as celebrities that adopt babies in "Tearjerker".

Stan mentions her name in the effort to create noise to keep Johnny Concussion's bomb from exploding in "The Long Bomb".

Retrieved from "https://americandad.fandom.com/wiki/Halle_Berry?oldid=75879"
Community content is available under CC-BY-SA unless otherwise noted.