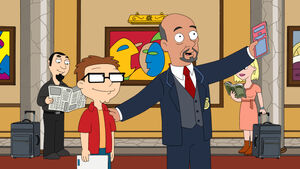 Elizondo guest stars as himself in "Fartbreak Hotel" working as a concierge as he helps Steve Smith travel though time to 1981 to meet the artist who painted the portrait of his dream girl. He has played a concierge in over 400 movies and TV pilots. He also says that acting pays the bills, so that he can chase his true passion- Conciergeing. He is told that if he uses the power of his mind, he can will himself to travel in time back to meet his dream girl. Although Elizondo's other motive is to find someone to go back to when he was born to hug him. He successfully travels though time and meets the artist who painted the portrait but is drugged and stripped while unconscious. When he awakens the artist reveals that Steve himself is the girl in the painting and the shock returns him to his own time where the concierge reveals that he too had traveled through time to be painted as a girl as well. Hector also helps Francine travel back to stop herself from abandoning her family for the life of a successful businesswoman.

Retrieved from "https://americandad.fandom.com/wiki/H%C3%A9ctor_Elizondo?oldid=39163"
Community content is available under CC-BY-SA unless otherwise noted.