Start a Wiki
watch 02:23
'American Dad!' Profile: Gwen Ling
Do you like this video? 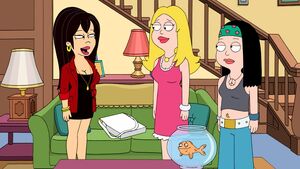 Gwen Ling is Mah Mah and Bah Bah Ling's natural daughter and Francine Smith's adoptive sister. In "Meter Made", Francine reports Gwen is supposed to be three years younger than she is. However, in "Now and Gwen", Gwen is a senior in high school while Francine is a freshman, making her roughly three years older.

Francine talks with Gwen on the phone about Stan's shortcomings in "Meter Made". When discussing the conversation later, Stan considers her "hot".

Stan also mentions Gwen in conversation with Francine in "Surro-Gate", where he mentions she never looked more attractive to him than at his and Francine's Wedding.

In "Big Trouble in Little Langley", Stan tries to drive a wedge between Francine and her adopted parents in order to get rid of them by revealing that they have left Francine out of their will, leaving everything to Gwen. However, Bah Bah reveals to Stan that the only reason they do that is because they consider Gwen an idiot who needs all the help she can get, while Francine did well by marrying Stan.

Gwen visits the family in "Now and Gwen" as a cover for her probation officer and to continue her scams. Hayley gets annoyed with her mom always covering for her and finally tells her off, receiving a vague warning. When she tells Francine, she discovers that Gwen took the blame for a school fire started when Francine tried to emulate her sister's smoking in school and had tried to make up for it ever since. As a result of Hayley's confrontation with Gwen, she plans on setting the school on fire and framing Francine for it. With Gwen admitting that she took the blame the first time due to her love for her sister, they work out their differences. Gwen offers Francine a cigarette to celebrate patching things up, but they set the school on fire and Francine agrees to take the blame and be arrested. But Gwen gets arrested for breaking her parole while Francine's charges are dismissed under a suspended sentence due to Stan's influence. As a result, Gwen promises revenge when she gets out. Meanwhile, Stan tries to teach Steve how to hug Gwen for a sexual thrill, but Steve proves to be an overachiever when Gwen mistakes him for being retarded and allows far more contact than Stan could dream of achieving.

She is one of the savage survivors in "The Two Hundred" and is also listed as a possible owner of the mineral rights under the Smith property in "Mine Struggle".

Uma Thurman provides the voice of Gwen in "Now and Gwen".

Retrieved from "https://americandad.fandom.com/wiki/Gwen_Ling?oldid=76469"
Community content is available under CC-BY-SA unless otherwise noted.