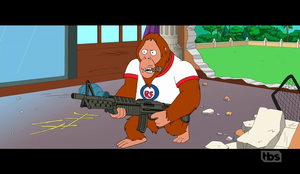 Gus is an orangutan that appears as Vin Diesel's assistant and co-pilot in Stan's re-imagining of the story of Charles Lindbergh in "Fight and Flight".

When the Lindbergh baby is kidnapped by a criminal mastermind, Diesel's Charles Lindbergh bursts in and takes up the top henchmen, but when the rest of the gang is summoned, Gus arrives with an automatic weapon and guns them down, leaving Diesel to kill the mastermind. Diesel jokes that next time he can fly.

During the production, Stan originally contemplating killing the "monkey" he wanted to use instead of the baby, but elected to keep both.

Retrieved from "https://americandad.fandom.com/wiki/Gus?oldid=70478"
Community content is available under CC-BY-SA unless otherwise noted.