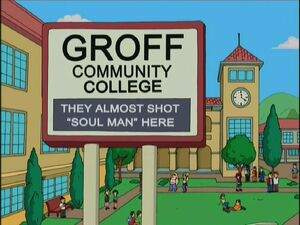 Groff Community College is the college which Hayley attends. It is frequently referred to as being for dumb people by Steve but also by Hayley when she says she needs 85 dollars for a semesters tuition. It also harbors a Theta Sigma (ΘΣ) frat house and the School of Arts & Crafts.

Stan ends up working as a security officer at the college in "Big Stan on Campus". But his actions lead to the kids rioting when he tries to exert his authority after trying to be friends first.

It's noted in "The Bitchin' Race" that Hayley has dropped out of college. However, she was still taking classes in "Funnyish Games". In that same episode, Steve took Architecture 101 at Groff despite being still in high school. Hayley came close to graduating in "Pride Before the Fail" but is still a student.

She briefly takes investigative journalism in "Hot Scoomp" before dropping out of the class.

The audio commentary for "Stan Knows Best" indicates that the college was named after Jonathan Groff.