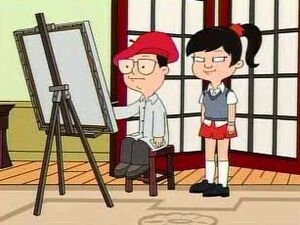 Grey DeLisle is an American singer-songwriter, and voice actress. Billed as a "Superstar Voice Actress" on the Anime News Network. She portrays several voices including Mandy on The Grim Adventures of Billy & Mandy, Vicky in The Fairly OddParents and Daphne Blake in Scooby-Doo.

DeLisle has released four music CDs, which include goth-inspired folk and Americana tunes, and a few gospel-style songs.

She has provided the voice for Toshi's sister Akiko in "Weiner of Our Discontent" and "Shallow Vows", but was replaced by Grace Park in "Best Little Horror House in Langley Falls".

Retrieved from "https://americandad.fandom.com/wiki/Grey_DeLisle?oldid=64476"
Community content is available under CC-BY-SA unless otherwise noted.