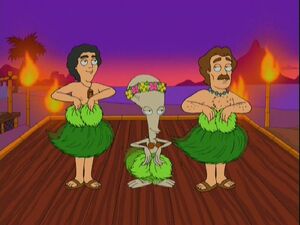 Gregory "Greg" Brady Is a fictional character on the television show The Brady Bunch. Greg is the oldest Brady son and was played by Barry Williams. Greg is a Westdale High School student who plays football, plays guitar, surfs, and aspires to be a singer. Greg is portrayed as self-confident and brassy at times, and generally acts as leader and spokesman for the kids.

Greg and Magnum, P.I. appear in a fantasy sequence of Roger's in "Rough Trade" for winning the sales contest at Fusfeld Motors.

Retrieved from "https://americandad.fandom.com/wiki/Greg_Brady?oldid=51675"
Community content is available under CC-BY-SA unless otherwise noted.