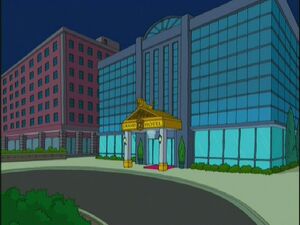 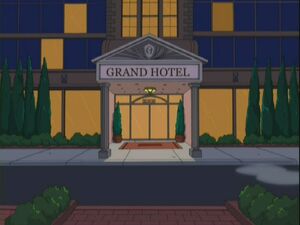 The Grand Hotel in Atlantic City is where Stan and a stowaway Roger stay while attending Bobo Peterson's bachelor party by mistake in "Roger 'n' Me", Stan show up and completely embarrasses him, including presenting a Japanese sex doll to him in front of his future father-in-law, Reverend Hideki Obayashi. When they are kicked out of the party, Stan and Roger get drunk and share an intimate moment in the hotel pool.

A different Grand Hotel is the site of Stan and Joanna's honeymoon in "When a Stan Loves a Woman". When Francine is unable to locate them to stop them, she passes the time in the hotel bar pondering her fate of dating lowlifes.

Retrieved from "https://americandad.fandom.com/wiki/Grand_Hotel?oldid=37802"
Community content is available under CC-BY-SA unless otherwise noted.