Gorillas in the Mist 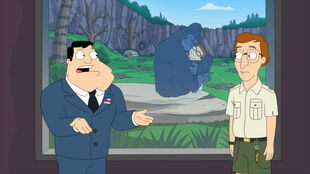 Gorillas in the Mist
Stan spends some quality father-son time with Steve at the local zoo. 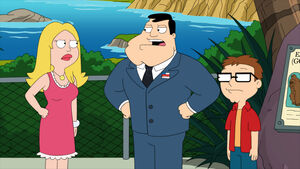 While out with the guys at a sportsbar, Reggie invites everyone to party on his houseboat and encourage the Spring Break girls to show off their breasts. While making t-shorts for the party, Francine calls Stan and reports Steve tried to skip his PSA test to go to the zoo. Picking Steve up from school just before Reggie's boat party is about to cast off, Stan is forced to bring Steve along when they get caught in traffic. Stan tries to secure Steve by locking him in one of Reggie's bathrooms on the boat but he gets to come out when Jackson uses the bathroom.

Even though Stan wants to lock Steve back in the bathroom, Steve manages to win the guys and Stan over with a dirty joke although Reggie's boat manages to sink another boat of Spring Break participants. Sharing some beers, Stan and Steve bond and Stan decides to become friends with Steve instead of their father-son relationship as Reggie is arrested for sinking the other boat. The next morning, Francine discovers they had been drinking together and Stan passes the blame to Steve and promises to punish him. With Francine satisfied, Steve tries to understand why he is to be punished and Stan tells him he only said he would punish Steve to make Francine happy and has no intention of punishing him.

Francine catches them hanging out together and questions if that is part of Steve's punishment. Steve calls Stan at work and invites him to catch the last day of a gorilla exhibit at the zoo. Despite some misgivings, Stan joins Steve where Steve reveals his friend Wilson will let them into the gorilla enclosure. Stan balks so Steve insists on going in alone where he is promptly grabbed by a gorilla named Bobo. As Bobo plays with Steve, the zookeeper arrives. Despite Stan's request to tranquilize the gorilla, the zookeeper is hesitant because Bobo may crush Steve when he collapses and calls Bobo's handler at a porno theater. As Stan gets frustrated waiting for Bobo's handler to arrive, Stan tries to rescue Steve himself but Bobo chases him up a tree. At that moment Francine calls and reveals she has been watching them on the news and pledges to come down and kill him if the gorilla doesn't. Bobo's handler arrive and asks Bobo to release Steve but Bobo insists on keeping Steve for the night for what Steve assumes is to engage in sexual intercourse with him. At that moment Bobo's father Rex appears and signs for Bobo to release Steve, questioning Stan's parenting skills. Stan objects, telling Rex that they work better as friends. Rex points out that Steve needs a father more than a friend and grounds Bobo. While newscaster Terry Bates tears up at the bond between a father and his son, his own father Tank Bates is watching in a bar. When the bartender asks Tank it that was his son, Tank changes the channel to where a boy is breakdancing and says that is his son. As Steve hopes they continue to be friends, Stan tells him that their old relationship is returning and he'll have to make up the classes he missed. As Francine arrives, Stan cuts her off with his own punishment of cleaning the gutters and buying her a diamond bracelet. At a loss for words, Francine agrees but despite Stan's pledge of buying her the most expensive diamond bracelet he can find, balks at paying $50 from a discount store. 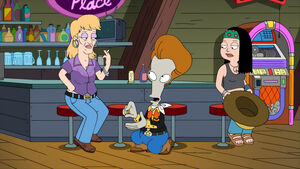 Meanwhile, Roger turns his attic bar into a country and western roadhouse. Roger decides that anyone can sing country music but is booed off the stage when he tries. Hayley explains that is comes from disappointment and hard living so Roger proposes to Naydern, a woman at the bar who claims to have an unbearable life. After their wedding he arrives at Naydern's trailer only to find she doesn't have an espresso machine and leaves. Roger tries to assume a new persona of a calypso singer but Naydern tracks him down and drags him back to her home where she and her children threaten to shoot him as he tries to escape. Roger fakes being a victim of spousal abuse in order to have Naydern arrested and the children placed in foster homes. As they are taken away, an ugly neighbor woman comes over and tells Roger it looks like he'd been through some hard times. Roger starts to tell her that he hadn't until he saw her but is struck with inspiration for his county song which is a hit back at Roger's Place.

Previous Episode /// Gorillas in the Mist \\\ Next Episode