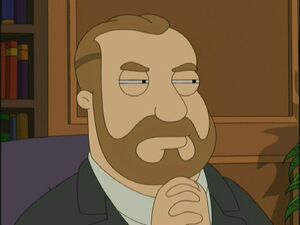 Gordon is one of the executives at the Mr. PiBB Factory that plan on stopping production of Mr. PiBB in "A.T. The Abusive Terrestrial". When Gordon and the other executives become distressed that Stan and Francine take it upon themselves to try to save Mr. Pibb and steal the Mr. Pibb Mobile, they first try to demand they cease but are disabled by Francine with a purse full of Mr. Pibb cans. They then bring the real Mr. Pibb to the Smith's who reveals they are only stopping production of the original Mr. PiBB to introduce "Mr. Pibb Xtra" to appear to a newer, younger crowd.

Gordon waits in a pushcart line in "Pulling Double Booty" and attends the Homeowners Association meeting in "Roy Rogers McFreely".

Gordon's basic character design is reused with darker hair in a number of cameos, including in Stan's hallucination of his organs for sale in "The Old Country".

Retrieved from "https://americandad.fandom.com/wiki/Gordon?oldid=90407"
Community content is available under CC-BY-SA unless otherwise noted.