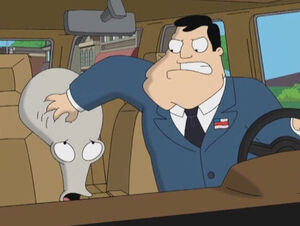 A new version of "Good Morning USA" replaced the original opening beginning with "1600 Candles". It still opens with Stan in his underpants getting out of bed and flexing. But instead of him opening up the window in the next shot, he is fully dressed and down the stairs and greets the day to pictures of the Statue of Liberty and Jesus. And instead of hugging his family in the next shot, he hugs Hayley who sneakily puts a peace sticker on the back of his jacket, salutes Steve and hugs Francine who gets rid of the sticker. The newspaper shot is replaced by Klaus giving Stan his car keys with his fin. Instead of the original newspaper headline gag, Roger would pop up in the SUV wearing one of his disguises to sing a line. Stan would also hit the flagpole at CIA headquarters with the car.

I've got a feeling that it's gonna be a wonderful day

The sun in the sky has a smile on his face,

And he's shining a salute to the American race

Oh boy it's swell to say,

Roger: Good morning USA! [Stan pushing him back into the seat] Ack!