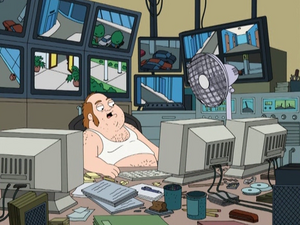 Gil apparently monitors security at CIA Headquarters. In "Stan's Night Out", Stan tells the guys that he made a promise to Francine to spend time with her and he has never broken a promise. He looks up at a security camera and asks Gil for confirmation. Gill however, is sitting in dirty clothes on and ignoring the camera monitors behind him.

Gil makes a crowd scene cameo in "100 A.D." and at the Chimdale Roller Rink in "LGBSteve".