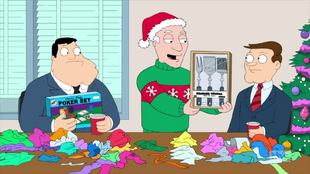 The torture variety pack is tempting

Gift Me Liberty
Stan sets out to discover who scrooged Bullock's Christmas.

Roger's Disguise: Roger in the future from "The Longest Distance Relationship" 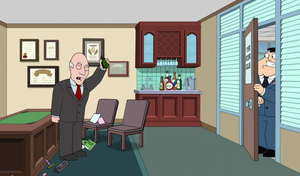 During the annual "evil Santa" CIA gift exchange, Bullock becomes upset when it is revealed that someone did not bring a gift to the exchange and puts Stan in charge of discovering exactly who that person was. Following orders, Stan roughs up his co-workers until no one is left and comes to the realization that he was the one who forgot. Fearing Bullock's wrath, he employs Roger in persona as a detective who abuses CIA resources and advises Stan to lie by simply choosing the next agent to be killed in the line of duty. However, when his choice turns out to leave a wife and family behind who will be cut off from his pension by Bullock in revenge, Stan wants to tell the truth but is dissuaded by Roger. Vowing to protect the family, Stan tries a second job but finds the work pays too poorly, so he tries for quicker cash by setting out to rob a bank, but ends up selling both sperm and blood until he is left in a near-death state. Giving up, he informs Bullock of the truth, who goes easy on him, but reveals an entire year has passed as Stan is shown that another "evil Santa" is underway as Roger puzzles over the broadcast month of the episode. 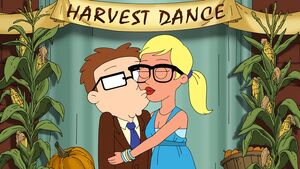 Meanwhile, after buying a vintage handkerchief used by a renowned ladies man, Steve scores a hot date for the Harvest Dance, only to find she has used him to get past her parents to really go out with her bad-boyfriend. But when other girls start to offer him cash to do the same for them, he latches on to a business opportunity, employing Klaus and Hayley to staff his "dating" service. But during a dance, all of the girls turn up sick and at least one of the bad-boys has died. The center for disease control raids the dance and finds Steve loaded with germs from the handkerchief, but is immune due to his sexual immaturity.

Retrieved from "https://americandad.fandom.com/wiki/Gift_Me_Liberty?oldid=83732"
Community content is available under CC-BY-SA unless otherwise noted.