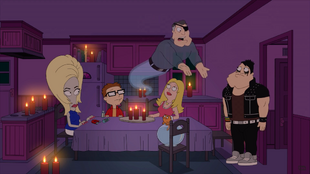 Ghost Dad
Stan struggles to cope with the untimely death of his father.

Roger's Disguise: Lacey Krinklehoel from "Pride Before the Fail" 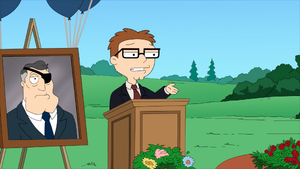 As the family settles in to watch television for the night, they watch Jack Smith get gunned down following a car chase. Francine busies herself preparing for the funeral, but Stan seems oddly disconnected, forming a teen band, where he takes out his frustrations with the drummer. Deciding that his issues are a lack of closure with his father, Roger agrees to pose as a medium to fool Stan into thinking his dad is present. But Roger's incantation actually summons Jack, and they find he's bound to the house afterwards. 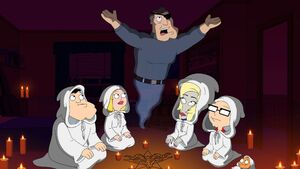 His habits soon get on their nerves, so they decide to consult with some of Hayley's old Wiccan books, but when he discovers what they're up to, he offers to help, as he claims he's tired of hanging around as well. The ceremony seems to go well, but he has actually replaced Steve's consciousness with his own. Stan gets suspicious when Steve's mannerism seem to reflect those of his father. An investigation into Steve's room turns up plans for a heist at a sports memorabilia museum, made possible with Steve's smaller frame. Stan and Roger arrive just as Jack reaches for the first pitcher of Arnold Palmer tea and lemonade mix. He brushes off their pleas, but Stan's praise reaches to Steve deep inside. Realizing that this is the key, he continues to hesitantly praise Steve as he slowly climbs out of his subconsciousness and kicks out Jack's spirit, who finds himself trapped in the museum when the rest escape. 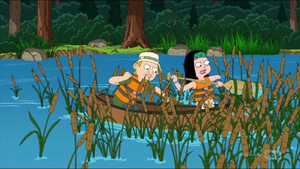 Meanwhile, Hayley and Jeff celebrate their anniversary by camping. But when they go to rent a canoe, they disregard advice for separate ones and take off together. They soon find themselves at each other's throats, which continues even after they quit canoeing. Giving it a second try without luck, they blame their bickering on the canoe paddles they got for each other and toss them overboard. Their love for each other returns, but they are unaware that they are about to go over a waterfall.

Back home, Steve shows off some newly gained athletic prowess for more grudging praise from Stan. When Hayley and Jeff return, following a brief rundown, they ask what else they missed and Klaus speculates that Steve may have made love to an old lady.

Retrieved from "https://americandad.fandom.com/wiki/Ghost_Dad?oldid=89560"
Community content is available under CC-BY-SA unless otherwise noted.