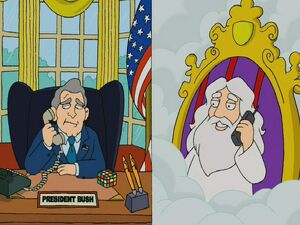 God asks George Bush to downplay their relationship in the Pilot episode of American Dad, and subsequently talks to Dick Cheney as if he is the one really in charge. In this appearance, Bush is voiced by Chris Cox.

Hayley snaps at Roger at she didn't vote for Bush when he is forced to wear a Jumbo Juice cup disguise to get out of the house in "All About Steve".

Bush is the subject of Stan's fantasy rescue in "Stan of Arabia: Part 2".

He is the primary focus of "Bush Comes to Dinner", when Stan writes up an outstanding essay about his presidential term and gets to have dinner with him. It wasn't until Bush accidentally got drunk by Roger, and Hayley takes him to wild things so that she can create a scandal out of revenge of Stan of calling her a 'lost cause' after being confronted for drinking. It wasn't until Stan finally got Bush back on his knees and got proof that Hayley was drinking, that she finally admits to being a 'lost cause', to which Bush starts to berate Stan for it. Bush then admits of having gone wild so many times in Hayley's age, but convinces Stan to go easy on Hayley, believing that she's on the 'track to be President'. Realized that he has been overreacted, Stan apologizes to Hayley, who now holds a newfound respect for Bush, decided to delete all the incriminating photos of him, believing him to be better than Cheney. He is voiced by Dee Bradley Baker in this episode.

In "When a Stan Loves a Woman", Francine offers Stan a trip to Texas where "the President pretends to be from."

Stan uses a portrait of him as an example of a real man in "The Magnificent Steven", much to Francine's frustration as Stan shows affection for Bush.

Roger defaces a painting of George Bush in "One Little Word".

Klaus attends a conference in "Poltergasm" where George H.W. Bush is a guest speaker, taking a potshot at George.