Gas of the Mohicans 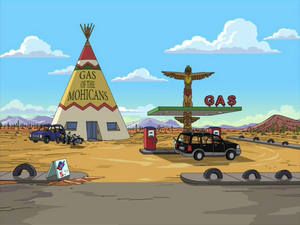 Gas of the Mohicans is a Native-American themed gift shop and gas station in "Delorean Story-an". Steve soon comes to realize that traveling with his father Stan is not all its cracked up to be until he sees another father and son enjoying themselves. However, when he tries to have the same fun with his father, it backfires. The run into further mishap when they tip over a group of biker's motorcycles into another driver's car. When they run into trouble later, the driver extracts revenge.