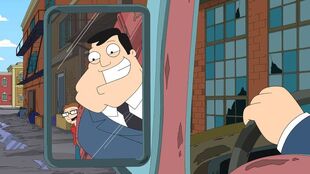 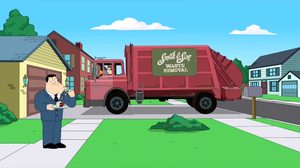 When grampa Smith's storage locker is ordered to be claimed or it will be sent to auction, Stan refuses to have anything to do with it. But Steve, curious to find out more about his grandpa, goes to the storage center and discovers a garbage truck in the bin. When Klaus helps him drive it home, Stan is angry at first over their refusing to listen to him but changes his mind after a happy flashback of hauling garbage with his dad. They take the truck out on a run on the old route for memories sake, but when Stan forces Steve to get out of the truck to handle the garbage itself, he finds himself embroiled in passing money and other goods between various shady businesses that Jack used to handle. Discussing his concerns with Klaus and worried that his dad will find out that his feelings about Jack are correct, the conversation turns to a new deluxe garbage truck and he decides to keep running the route until he can raise the cash. 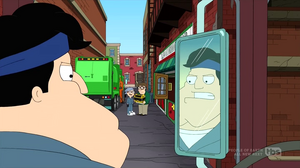 Stan discovers the scheme when Steve drops a fortune cookie from a stop filled with a bag of cocaine and realizes that his opinion about his father was right in the first place. He returns the garbage truck to the storage lot and locks it away. But when Steve disappears from home, he returns and finds that he didn't get the old truck back out, but is doing the run in the brand-new truck he purchased. Stan watches him return to each of the businesses and tell them he's quitting, but various evidence is planted in his truck to frame him. Arriving at the dump, Stan sees that Steve is about to be inspected and get busted, so he rams the truck though the gate. Once inside, he launches himself through the window in a 'brake check.' Talking with Steve reminds him that not everything grandpa had a hand in was tainted as he helped make Stan a great father. They drive the new truck towards a cliff but fail to bail out as planned, but make a safe landing anyways as does the truck until it lands on the conveyor belt to the incinerator and the evidence is destroyed. As they come up with wild ideas for escaping the dump, they are overcome by methane gas emanating from the garbage. 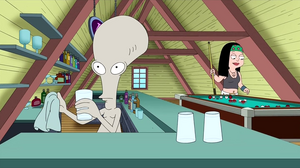 Meanwhile, Roger buys his own old storage unit accidentally at the auction and digs his old bumper pool table out and takes it home. There, he finds Hayley is a natural at bumper pool so he sets her up to play South Dakota Slim, the best player at the Lanceton Recreation Center. However, Slim turns out to be a teenage persona of Roger's named Justin Hemingway, so Hayley walks out in disgust. Slim, an alias of Justin, goes home and deals with his mother who is upset that her husband had left them, so Justin goes in search for him and Mr. Hemingway returns home, yet another persona of Roger's.

Retrieved from "https://americandad.fandom.com/wiki/Garbage_Stan?oldid=79043"
Community content is available under CC-BY-SA unless otherwise noted.