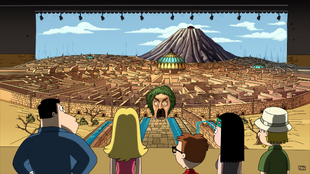 Game Night
During game night, the family gets lost in a maze. 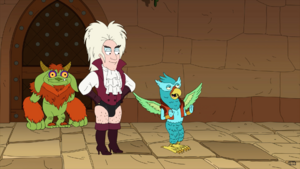 Bullock invites the agents over to see his new labyrinth, but Stan takes a pass for family game night, where it turns out the family usually lets him win to avoid his temper tantrums. But Stan becomes bored with their supply of games at the same time that Bullock bemoans that no one can beat his labyrinth. Eager for a new challenge, Stan takes the family to challenge it. After an introduction outlining the challenge, they start as Stan repeatedly misunderstands the skills needed, to Jeff's frustration. He finally tells off Stan, who decides to go his own way to prove he's the best game player. 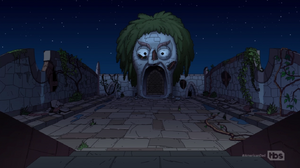 The rest of the family quickly solves the labyrinth and tries to drag Stan out, but he refuses to leave until he solves it on his own. The family leaves him behind for a solid month until they HAVE to retrieve him. They find that Bullock has totally forgotten about it and has locked it off, but after getting the key, they go and find things have gone downhill. They work their way through a more twisted version of the previous labyrinth, but a monster annoyed with Stan's behavior sends them all the way back to the beginning. As the family is frustrated, Stan proposes a stop for a snack first and climbs a mountain of refuse up to the CIA employee break room. The family follows and points out that he has managed to lead them out of the labyrinth, which he celebrates with a nude dance. 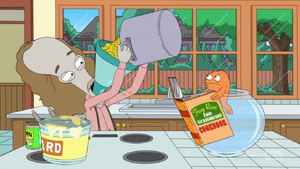 Meanwhile, Roger discovers foie gras and, due to the cost, decides to grow his own by capturing some geese from a park. Working with Klaus, they try to fatten them up, but Roger becomes hooked on the feed and fattens his own liver. He then becomes the target of a geese-hating Sully Sullenberger and Frog Ross, the owner of a chain of foie gras restaurants. The former is quickly dispatched by Ross and, to avoid a scene, Roger slices and cooks up his own liver, killing not only Ross, but his geese as well.

Retrieved from "https://americandad.fandom.com/wiki/Game_Night?oldid=88879"
Community content is available under CC-BY-SA unless otherwise noted.