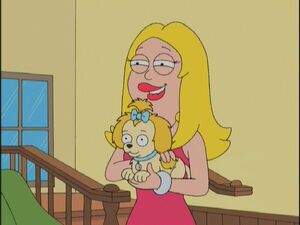 Fussy is a small dog whose owner, Anne Flemming, died when run over by runaway shopping carts in "Not Particularly Desperate Housewives". When Francine brings it home, Stan at first hates it and tries to get rid of it, considering the dog to be too effeminate for his taste. But when he sees Fussy hates Roger, Stan decides to keep it for a while. Roger figures out how to make friends with Fussy and makes Stan angry until he gets advice from a pet store clerk that Fussy would follow Stan if he showed he was the 'Alpha Male' or big dog of the house. Stan attacks Roger but finds that Fussy has left to stay with a homeless person. Stan reluctantly says goodbye.

Fussy appears with Anne Flemming in a newspaper clipping that Marguerite glances at while investigating the hot tub in "Hot Water".

Fussy is mentioned in "Stan's Best Friend" when Stan claims it was a dream by Francine.

From the DVD commentary, Fussy is named after American Dad executive assistant and writer Matt Fusfeld.