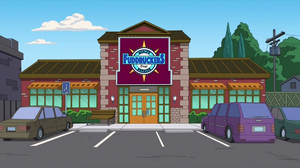 Fuddruckers is an American franchised restaurant chain that specializes in hamburgers, notable for their large toppings bar where patrons can build their sandwiches as they see fit.

Stan takes the family to Fuddruckers after a physical in which his doctor noted several issues about his health. Ignoring such concerns, he drinks a glass of ranch dressing before floating his way to cheese cauldron on a river of ranch dressing. As Francine worries about his health, Roger suggests tricking him into thinking that he has had a heart attack by giving him a near-death experience by electrical shock, which he is capable of administering though his finger. He demonstrates on a roach he supplies which he then sends after the recipe for tangy Tai sauce. When the roach returns, he also requests the recipe for zesty ranch, to the annoyance of the roach.

While at Fuddruckers, Steve worries about missing the school college fair so Klaus offers to take him to Arizona State University for a college visit.

Retrieved from "https://americandad.fandom.com/wiki/Fuddruckers?oldid=73480"
Community content is available under CC-BY-SA unless otherwise noted.