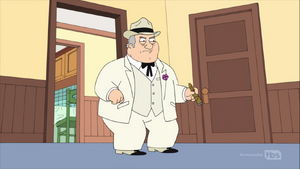 Frog Ross is the owner of a chain of foie gras restaurants.

In "Game Night", after sampling some foie gras in one of Frog Ross' restaurants, Roger develops a taste for it. But due to the cost, he decides to gather some geese from a park to make his own. He becomes hooked on the feed and fattens up his own liver instead, drawing the attention of Ross and Sully Sullenberger to his geese. Ross kills Sully, and Roger decides to share his liver with him and the geese, poisoning them in the process.