For a complete script, see: "Frannie 911" on the Transcripts Wiki

Klaus: [Offscreen] Say it! You have to say it!
Hayley: Help! Raccoons took my penis! 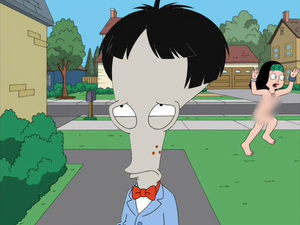 Hayley: Hey Klaus check it out, my dad is gonna hit the roof.
Klaus: Oh a temporary henna tattoo, how daring. What’s next, you gonna bake cookies at three hundred fifty ONE degrees?

Francine: Roger, please. if you have to be a jerk to live then come on. Give us all you got.
Roger: Are you sure?
Stan: Yes Roger, we're sure.
Roger: Ok. Send me Steve. Dance for me.
Roger: Ok, Ok, that's enough, I've got what I need. You are terrible. You've got no rhythm, no coordination, I've seen two epileptics share a bowl of noodles with more grace. If your goal was to inspire a sense of despair the likes of which hasn't been seen felt since Whoopie hosted the Oscars, then bravo.
Francine: Ok, I think that's enough Roger.
Stan: Honey, no, it's good for the both of them.
Roger: I can envision millions of Americans rising up as one and demanding legislation that would require your legs to be amputated, burned, and buried next to Hitler. in short, you suck! Oh, yeah, that's the stuff!

Francine: Look, what if I take you to a motel?
Roger: A motel!? Y...you think I'm a prostitute but I'm not!

Stan: You destroyed my study!
Roger: You barged into my sauna! You know how stressful that is? I just unclenched my anus.

Francine: You know why Stan didn't come? He doesn't like you! And you know what else? I don't Like you either!
Roger: Yes you do!
Francine: No. I don't. Now if you wanna win back my love and be part of this family, you're gonna have to be nice!
Roger: I can't just be nice all the time, it's not in my nature!
Francine: Then I'm sorry, Roger, but this is good bye.
Roger: No! Don't go! I'll do anything!
Francine: Are you sure? You're really ready?
Roger: Yes, yes. I'm ready to quit drinking.
Francine: That's not what this is about.
Roger: Oh, thank God.

Retrieved from "https://americandad.fandom.com/wiki/Frannie_911/Quotes?oldid=87613"
Community content is available under CC-BY-SA unless otherwise noted.