To start a complete script, see: "Four Little Words" on the Transcripts Wiki

Francine: I told you so!

Melinda: [about Bullock] Oh, God, Francine, please tell me this is my blind date's dad!

[After Bullock kills Melinda]
Stan: Oh, my God! Is she dead?
Bullock: Quite.
Stan: Boy, you are rusty.

Stan: I cannot hear those words again, and I'll do whatever it takes to keep her from saying them, as God is my witness! [Lightning strikes]
Klaus: Weird, not a cloud in the sky.
Stan: Yeah, I know. Must be heat lightning.

Steve: Roger, we can't keep doing this.
Hayley: Yeah, I mean, it's stealing.
Roger: Oh, oh, excuse me, are you an ethicist? Are you? Is there an ethicist in the house?!
Woman: I'm an ethicist.
Roger: Well, screw you, I'm Kevin Bacon!

Francine: [while teaching Indian children] Okay, children, pay attention, because you need to learn English to survive. Repeat after me: "Thank you for calling Apple Tech Support."
Indian Children: Thank you for call Apple Tech Support.
[A bloodcurdling human scream is heard from off-camera]
Francine: There's the bell. I'll see all of you who don't die of cholera tomorrow at 8:00. 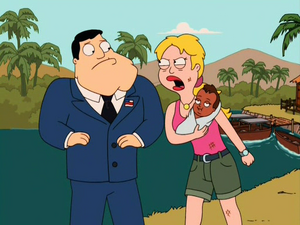 Francine: You bastard! [punches Stan in the face, knocking the clothespin off his nose]
Stan: [sniffing] Ugh! Oh God, it's like being in a sauna with Michael Chiklis!
Francine: You made me think I was a murderer?! Do you have any idea what a nightmare you put me through?! I prayed to a freaking elephant! How am I gonna explain THAT to Jesus?!

Francine: What about Sanjit? I can't have an Indian baby! I don't even like Indian food!

Roger: Mirror, mirror, on the wall... let's see how you like it on the floor!

Steve: There he is!
Roger: That little feelings-hurter is about to eat crow! I'm going to rub his nose in my nose!
Young Child: Mommy, look! It's the monster! [Roger gasps] The monster from the hit movie, Hollow Man!
Young Child's Mother: Oh my God! It IS Kevin Bacon! Normally I'd chastise you for watching an R-rated movie... but Kevin Bacon is an American treasure! Even when he's playing an invisible rapist!

Steve: Sir, you killed your date? What in the name of Phil Spector happened?

Retrieved from "https://americandad.fandom.com/wiki/Four_Little_Words/Quotes?oldid=87516"
Community content is available under CC-BY-SA unless otherwise noted.