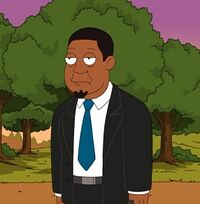 Forest Steven Whitaker (born July 15, 1961) is an American actor, producer, and director, appearing in films such as The Butler, Battlefield Earth, Bird and Ghost Dog: The Way of the Samurai and won an Academy Award, a Golden Globe and a BAFTA for his performance as Ugandan dictator Idi Amin in The Last King of Scotland.

He has appeared in three episodes as The Turlington Detectives:

Retrieved from "https://americandad.fandom.com/wiki/Forest_Whitaker?oldid=54061"
Community content is available under CC-BY-SA unless otherwise noted.