For Whom the Sleigh Bell Tolls 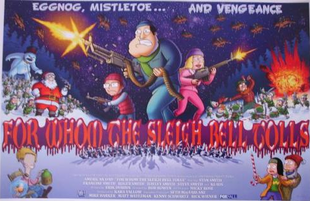 For Whom the Sleigh Bell Tolls
When Steve accidentally shoots Santa, he sends the North Pole into a tizzy and jeopardizes Christmas. 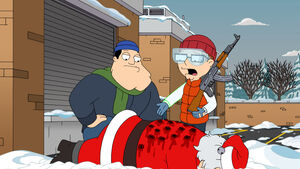 Stan continues to reject the idea that Jeff is now a member of the family despite Francine's suggestion that he be included in their family traditions. Despite Francine's objections, Stan gives Steve a gun for Christmas and when Steve accidentally shoots Santa, the family is forced to attempt to hide the body in the woods. Meanwhile, Roger goes off in search of the strongest whiskey possible and he is directed to a moonshiner who teaches him his ways. Despite their attempt to hide the body, Santa is recovered and resuscitated by his elves and vows vengeance on the Smith's. 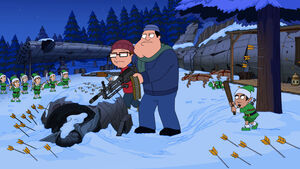 The Smith's take refuge in the moonshiner's cabin. Jeff arrives to spend the holiday with Hayley but Santa soon arrives and the family is forced to where fend off an attack of elves, reindeer and snowmen led by Santa. Santa tries to convince Jeff to abandon the Smiths, recognizing that he was not involved in their plot to hide his body but Jeff turns on Santa and is able to pull Stan to safety where Stan sees Jeff as a true member of the family. Santa vows to kill them all and the family is almost overrun until Santa's army is forced to retreat at dawn, vowing to return the next year.

Previous Episode /// For Whom the Sleigh Bell Tolls \\\ Next Episode