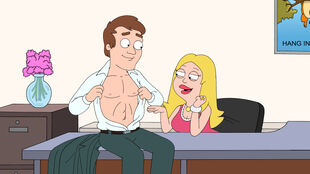 Flirting With Disaster
When Francine retaliates with a little flirting of her own, war breaks out at work. 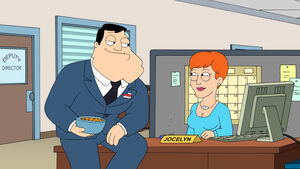 During the apparent filming of a Dutch documentary, Deputy Director Bullock is forced to promote one of the office workers Lorraine and hires Francine as a replacement. Francine soon finds out that the entire office flirts with each other and soon gets into the spirit of things. Stan is less enthused as he is very popular with the office ladies due to his muscular buttocks and is forced to restrain himself in front of Francine. When Francine finds out she tells him he can relax and continue his flirtations but when Stan sees the others in the office flirting back with Francine he starts to have reservations.

When Lorraine finds that the guys are no longer interested in her she becomes angry. Eating lunch with a depressed Stan, they both commiserate over how they need to get Francine out of the office. But as Bullock finds his partially-eaten sandwich in Francine's desk that had been planted by Stan, Lorraine throws acid in Francine's face, disfiguring her horribly. After being told that it could take years for a skin donation to become available, Stan confesses to Francine that he only intended to be fired and Francine kicks him out of her hospital room.

Francine returns to work to everyone's horror. Desperate to find someone to pay attention to Francine, Stan threatens to shoot Dick in the crotch but he ended up taking the bullet rather than face Francine. Stan then turns to Butch Johnson who confesses to being Chinese spy rather than face Francine, although he fails to notice the Dutch film crew are also Chinese spies. Chatting with the "film crew", they suggest he should pay more attention to Francine himself. When he goes home, Francine is resistant to his flirting at first as it feels like it shouldn't count because they're married, but soon warms up to the idea. As they embrace and Francine calls him by his office nickname "Thunderbutt", Stan hits on the idea of having some of his skin and muscles removed from his buttocks to be transplanted into Francine's face, restoring her looks. 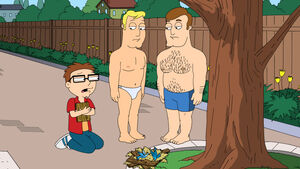 Meanwhile, Roger sees Steve building a birdhouse and talks him into starting a birdhouse building business. When the orders start rolling in Steve asks Roger to buy more supplies. But when Roger buys cheap supplies to pocket the cash difference for drugs and girls, resulting in the death of a family of birds, Steve breaks up their partnership. Roger later arrives and claims to have cleaned up is act. As they bid each other farewell, Steve gives a voiceover monolog that he knew Roger was faking it and within minutes he died of a drug overdose, the camera pulling back to show Roger on the kitchen floor.