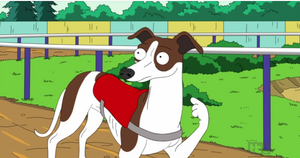 When Hayley finds herself pushed aside by everyone in favor of Jeff and Fleabiscuit in "Fleabiscuit", she decides to try to beat Jeff at his own game with Roger adopting a dog persona named Ryan. With Hayley and Klaus' training, Roger works his way up the ranks and gets a chance to face Fleabiscuit in the final race of the Triple Crown. When Jeff learns of this, he accuses Hayley of being jealous of his success and becomes even more determined to win.

But when Roger has sex with Darlene, Fleabiscuit's girlfriend right before the final race of the Triple Crown in order to demoralize him, Hayley manages to buy him enough time to get back in the race when she realized that if he loses, it'll break Jeff's heart. She calls attention to Darlene cheering on Fleabiscuit in the stands, while indicating her pregnant state. This motivates Fleabiscuit to win, prompting both Jeff and the dog to retire. Fleabiscuit is shown marrying Darlene and her eventual delivery. However, one of the puppies look suspiciously like Roger's Ryan, his racing greyhound persona.

Retrieved from "https://americandad.fandom.com/wiki/Fleabiscuit_(Dog)?oldid=82181"
Community content is available under CC-BY-SA unless otherwise noted.