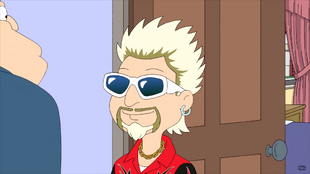 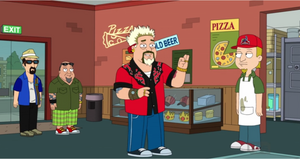 During family game night, Stan reveals that his personal hero is Guy Fieri, while all of Jeff's answers are pot related. Stan gets angry because of this and accuses Jeff of having no personal identity. He decides to lean on Jeff to make him get a job, but after Jeff scores a job at Pizza Overlord, Guy Fieri arrives to scout out the place for an episode of Diners, Drive-Ins and Dives. He invites Jeff to join his 'pesto crew', and with encouragement from Stan, does so. But when his mannerisms annoy Hayley, she lays down the law and insists that he quit. When he tries to do so, Guy Fieri announces his planned retirement and leaves the entire operation to Jeff. 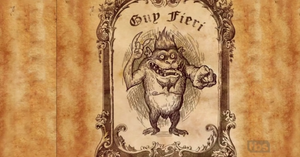 Hayley is heartbroken when she learns that Jeff decided to take Guy up on his offer when he returns in full Fieri regalia. Stan begins to wonder if he did the right thing, but when he tries to talk some sense into Jeff, he finds that he cannot strip Jeff of his Fieri outfit. Suspecting occult forces, he goes to the library to read more on the subject and finds out that Guy Fieri was actually a demon and the only way to banish him is to return him to Flavortown. Together, they travel to a remote jungle where Stan discovers that the key part of banishing the demon is for him to drink from a pool of habanero queso sauce. The demon is cautious at first, so Stan volunteers to sample it for him. Stan's inadequate description of the taste tricks Fieri into wandering into the pool itself. Stan decides that he likes Fieri more than he does Jeff, so he tries to rescue him, but they both end up back at the Smith home after falling through a portal with Jeff returned to normal. 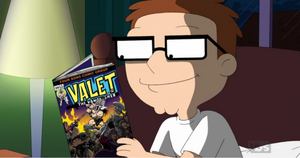 Meanwhile, Klaus goes to hang out with Roger and is mistaken for a car valet. Without cash or anything better to do, they go ahead and take up the job. Something odd happens when they hear Steve's voice but they decide to try to ignore it. They hear his voice again later but soon, a voluptuous woman invites Klaus into her car. She drives away and kills them both. Roger is left with angry customers when he admits he doesn't know where their cars are, as he only bothered to park them without noting their location. He leaps to attack just as it's revealed that Steve is reading a comic book, Valet the Vanquisher.

Retrieved from "https://americandad.fandom.com/wiki/Flavortown?oldid=81336"
Community content is available under CC-BY-SA unless otherwise noted.