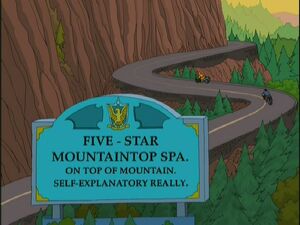 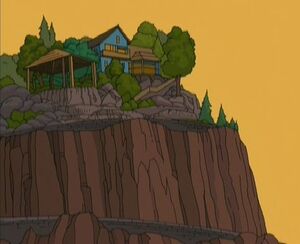 The Five-Star Mountaintop Spa is where George Clooney goes to clear his head of Francine when Stan reveals she was out to betray him in "Tears of a Clooney". When Stan upsets her plot to break his heart for stealing her scene in a television show, Francine plans to kill him if she can't break his heart. To stop her, Stan handcuffs her to a pipe in the hotel room, but she gets free by cutting off her own hand. The two engage in a motorcycle chase to the spa where Clooney is relaxing. Francine beats Stan, who is left hanging from a cliff. Stan asks her what the real reason is behind her hatred of Clooney, and it turns out this is just her way of having a mid-life crisis. Stan talks her out of killing Clooney, and the two head back to the hotel where Francine's hand has been put on ice to be re-attached. Stan breaks Clooney's heart himself by breaking off their friendship, while a gleeful Francine watches through video cameras hidden in Clooney's room. Stan later sheds a tear, showing regret for doing this. Finally satisfied, Stan wishes Francine a happy 40th birthday.

Retrieved from "https://americandad.fandom.com/wiki/Five-Star_Mountaintop_Spa?oldid=34952"
Community content is available under CC-BY-SA unless otherwise noted.