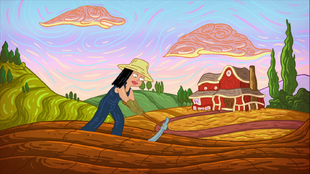 First, Do No Farm
Stan turns the house into an urban homestead.

Roger's Disguise: Si or Am (Lady and the Tramp) from "Enter Stanman" 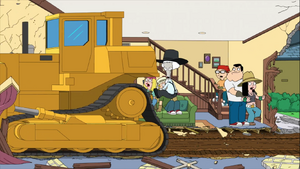 When Stan worries that Hayley is getting too soft, he goes for a drive to think and runs into a farm. After observing the hard work, he proposes selling the family home and moving to a farm. Hayley counters with a proposal to plant an urban, garden-type plot in the backyard, which the family accepts. However, Stan has the house bulldozed to increase the acreage and moves the family into a small, shed-like home. When Roger refuses to entirely give up modern conveniences, he is shunned by the family and departs. 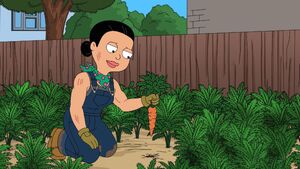 When a rabbit gets into the garden, Stan is prepared to kill it, but Hayley insists on taking it to safety where she splints its broken leg. However, she is rewarded when it breeds with another rabbit and wipes out their entire 'farm.' With most of the family incapacitated and Stan claiming a need to travel to sell their goat to save the farm, she takes over the replanting. But when she succeeds and pulls a carrot, she discovers Stan's been living the high life in a secret bunker filled with modern amenities, so she and the family shun him.

Moving in with Greg, he's actually proud of himself for making her tough until Roger, dressed as a rabbit and having moved in with the 'varmints' on the farm, shows him what a monster she's become in bullying the family. They decide the only way to get her back is to sabotage the farm, but Roger gets caught and they both nearly meet their end at her hands until they manage to make her comfortable with the modern furnishings in Stan's bunker.

Meanwhile, despite their best efforts, Klaus becomes a Scientologist and takes off for Florida, but bumps into Jeff, who was dumped in the woods to die by Hayley, when he has to escape after making a joke about Xenu.

Previous Episode /// First, Do No Farm \\\ Next Episode

Retrieved from "https://americandad.fandom.com/wiki/First,_Do_No_Farm?oldid=90220"
Community content is available under CC-BY-SA unless otherwise noted.