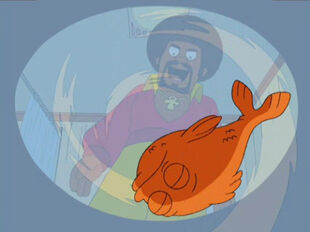 Klaus gets a day in a human's body

Finances With Wolves
Stan gets a hefty bonus 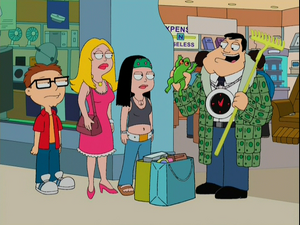 After receiving a hefty bonus from work, Stan buys extravagant gadgets while Francine pleads for her dream kiosk at the mall. Upset about his lack of support, Francine opens a muffin shop without his approval and gives Stan a taste of life without a housewife. In a desperate move, Stan puts Klaus' brain back into a human body; that of the frontman of an Earth, Wind & Fire cover band who was abducted by the CIA in retaliation for ripping them off at the summer mixer, thinking that Klaus will cook breakfast for him only to discover it was a huge mistake as Klaus takes Stan hostage, steals Stan's cash and then gets rid of his former goldfish body by flushing it down the toilet. Klaus then sets out to win over Francine. 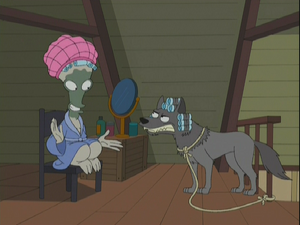 Meanwhile, Steve is convinced he's a teen werewolf after watching a horror film and being attacked randomly by a wolf. In actuality, Roger adopted a wolf from the woods, named it "Felicity" and, in the night, it killed another animal and covered Steve's room with blood. Another night, Steve and his friends go into the woods for his friends to kill him with a silver bullet; the actual wolf shows up and, in a confusing situation, they wind up thinking a silver bullet restored Steve to his normal self and separated the wolf from his body. 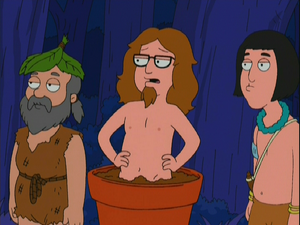 Klaus, after some quick preparations, seduces Francine at the mall before Stan arrives, revealing the ruse; but an eco-terrorist friend of Hayley sets off a series of bombs, blowing up a statue of Chief Shop-a-holic in the mall. Klaus dives out of the way to protect his new body; Stan, however, pushes Francine out of the way, but the statue piece hits his clock necklace of Stan's, ruining it but keeping Francine and Stan safe. Hayley's eco-terrorist friend is then placed under arrest. Klaus' body is half-crushed by a large piece of the statue, and near death he pleads with Stan to save his life. Francine also pleads with Stan to save Klaus' life, thinking he has learned his lesson about attempting adultery. Stan says the CIA has no more abducted people, so he purchases a goldfish from the mall pet shop and places Klaus' mind in it to save his life.