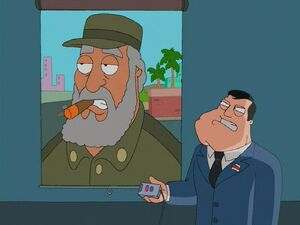 Fidel Alejandro Castro Ruz (August 13, 1926-November 25, 2016) was one of the primary leaders of the Cuban Revolution and the Prime Minister of Cuba from February 1959 to December 1976, and then the President of the Council of State of Cuba until his resignation from the office in February 2008. He was the First Secretary of the Communist Party of Cuba until replaced by his brother Raul Castro in April 2011.

Fidel Castro appears in Stan's presentation to the senate on the evils of television in "A Smith In The Hand" and in a film about the history of the CIA in "N.S.A. (No Snoops Allowed)".

Retrieved from "https://americandad.fandom.com/wiki/Fidel_Castro?oldid=70607"
Community content is available under CC-BY-SA unless otherwise noted.