For a complete script, see: "Fartbreak Hotel" on the Transcripts Wiki

Stan: What in the hell is that?
Francine: My zucchini casserole.
Steve: Zucchini?...ahaha, excuse me, but this not Italian squash.
Roger: The only thing Italian about this situation is your dirty lies!

Roger: Two years ago, my wife was killed by a plastic surgeon in Ecuador. I found him on Yelp. I gave him two stars. Her breasts looked amazing during the open casket. 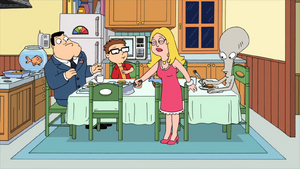 Francine: [sighs] You're right. It's not zucchini, it's okra. I guess when I was at the store, my mind was somewhere else. See, I sometimes escape to a little place in my head where no one complains about the meals I cook. [grabs the dinner knife and stabs Roger in the throat] And there's no more scraping snot rockets off the shower tiles. [pulls out a meat cleaver and decapitates Stan] And no more PB & J with the crust cut off. [Breaks Steve's neck before returning to reality still holding the meat cleaver] Anyway, if you don't want to eat it, I can fix something else.

Steve: Okay, it's May 14, 1981. President Jimmy Carter leaves the White House in disgrace. Pope John Paul II is shot in Rome by a deranged Jimmy Carter. Jimmy Carter kidnaps and devours thirteen Christian babies. Hmm. Maybe I should have read a real history book instead of the one Dad wrote.

Roger: [as Pete Pendelman] How does the hell does she know how to tap dance?
Doug: Because she's Sara Fucking Blanch!
Roger: Hey! You're a loudmouth, Doug! You're loud.

Roger: Nagel, you son of a bitch! Let's drug some kids. [A drugged Steve collapses] Oh, you kidding me? You already cut the turkey?

Hector: The girl in the painting was you, wasn't it, Steve?
Steve: How... how did you know?
Hector: Because I was once in love, too.

Retrieved from "https://americandad.fandom.com/wiki/Fartbreak_Hotel/Quotes?oldid=89168"
Community content is available under CC-BY-SA unless otherwise noted.