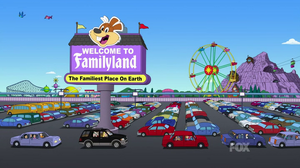 The Familyland Theme Park is where Francine insists on having a family outing in "Familyland" as one of the few good family trips the Smiths ever had.

The park is divided into five areas; Cartoon City, home of Mikey Muskrat and his cartoon pals. Fairy Tale Land, home of princesses. Wild Wild West World which relives the glory days of the old west. Outer Space Land with a retro-look at the future. And Simpler Times Mountain, a closed attraction notable for its racism and home to the park control room and park founder Roy Family's private apartment.

When Roy is unfrozen from his observation point in the park, his disgust with what his dream has become causes him to turn his park into a death trap for the patrons inside after he seals them in. The Smiths become the "kings" of their personal favorite land. Francine stumbles across Roy, causing him to announce a battle between the kingdoms in which he intends to free the winning team, although he tells Francine that he intends to renege on the promise and kill the survivors anyways. Francine uses the scent of her cinnamon cookies to cause the family to remember their home life and band together to confront Roy, who rewards their family spirit with lifetime passes to the park. However, due to a mountain of lawsuits, the park is turned into a memorial park for the victims.

While going though family photographs in search of pictures of Klaus in "No Weddings and a Funeral", Hayley finds one of the family at Familyland Theme Park.

Retrieved from "https://americandad.fandom.com/wiki/Familyland_Theme_Park?oldid=89372"
Community content is available under CC-BY-SA unless otherwise noted.