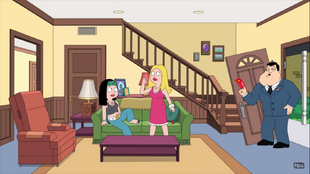 Family Time
The family goes out for dinner. 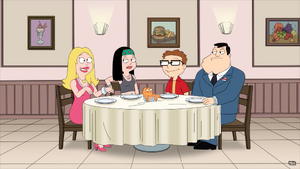 When Dr. Weitzman offers Stan a coupon to a new buffet in hopes of joining his family out, Stan instead grabs the coupon and ditches him. They are impressed when they are shown the VIP section, but as they await their dessert, they discover that it was part of a plan by Dr. Weitzman to drug them and make them part of his 'family'. When they awaken, they find that the restaurant was actually a front for a prison that they are now trapped in, along with Dr. Weitzman's robot helper. However, Stan refuses to believe in having a bad time at a buffet. Still, Dr. Weitzman begins to get on his nerves and he leads an escape attempt, but when they open a forbidden door that they believe leads to the exit, they discover it is another cell filled with skeletons of past families that he's taken. When he starts crying because the deceased actually committed suicide rather than put up with him, the family uses this to upset him so they can make their escape. 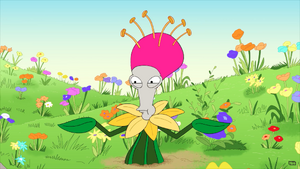 Meanwhile, Roger skips out on going with the family with a case of malaise. While taking a walk to clear his head, he decides that he wants to become a flower, but his peaceful reverie is broken when he is taken by flower pirates to be sold in stores. After two months in a shop, Roger is finally purchased by a guy to impress his girlfriend, and finds peace while they make love. But when her husband comes home and a gun fight breaks out, Roger loses his peaceful state.

After a while at home, the family begins to crave the buffet, so they try to blow their way through the wall, only to find Dr. Weitzman blew it up from the inside and is happy to have them back. Klaus, who had fallen into a soup tureen, crawls out in a bloated state from the non-stop food. When the doctor runs to get his guitar and Legos, they decide to try another buffet, but find out it is run by Tuttle.