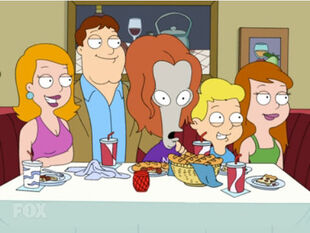 Family Affair
Roger has been hanging around with other families besides the Smiths. 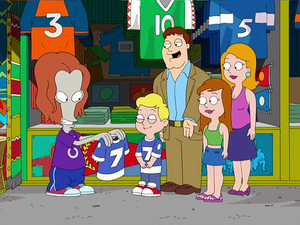 When the Smiths try to plan a family game night, Roger is full of excuses about prior commitments. When he is caught in a lie, the Smiths feel stabbed in the back because they realize Roger has been "cheating" on them with other families. Stan, Francine, Hayley and Steve go on the offensive to teach Roger a lesson about monogamy until--following a collapse at an amusement park after a surfeit of family fun--Roger has a breakthrough about why he isn't a one-family kind-of-guy. After realizing this instantly at a therapist, he goes to his first family, the Logans, to learn the reason why they abandoned him at the gas station. As it turns out, he merely rented a room in their house and they threw him out because he didn't pay his rent and because they were afraid of him. 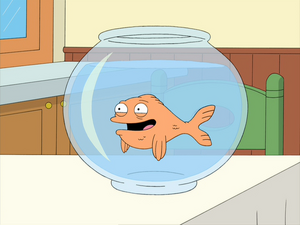 Meanwhile, Klaus scores six Fabulous Thunderbirds concert tickets about which he is ecstatic; however, he falls asleep just hours before the show begins and no one bothers to wake him. The family goes without him and, so that Klaus' ticket doesn't go to waste, they take along Reginald--another "volunteer" from the CIA's secret brain-swap program. The episode ends with a kicky 80s-style theme song about how Reginald, a homeless and starving African-American man, had his mind switched with a koala bear and now uses his inherent cuteness to perform undercover espionage missions for the government. Like Klaus, he also has a bit of a libidinous streak making a pass at Hayley.