For a complete script, see: "Failure is not a Factory-Installed Option" on the Transcripts Wiki 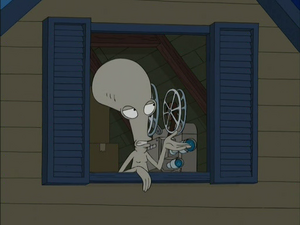 Roger: [after the repo man repossesses the cars] Ah, the death of the drive-in, harbinger of the slow demise of American cinema. The grand images, the big stars. Where did they go? Now everyone just sits at home. Now it's all TV, TV, TV! Wait a second. I have a TV! [goes to his TV] How could I forget you, my good-time gal? Who needs the damn movies? 15 bucks to see who's chasing Ashley Judd through the woods? Movies are dead. Long live TV!

Roger: Ah, Steve. Your first grope-fest. You won't truly appreciate the awkwardness of this moment until you're fondly reminiscing as a 35-year-old homosexual.

Steve: Hey, what are you doing with my dad's movie projector?
Roger: If I'm living in a storage unit so he can buy 20 cars, I'm going to get something out of it.
Steve: Get something out of it... Cars... Yes! The girls would go crazy over these cars. That's it!
Roger: Hey, Algernon, what's wrong with you? Can't you get an idea without saying it out loud?

Achmed: It's no use, CIA man. I will never talk. Never!
Stan: Shh! [thinking] Every man has a weakness. What is his? His teeth are yellow, so he's a smoker. The handcuffs around his wrists mean he's in some sort of trouble. The haunted look in his eyes suggests that he doesn't know what Eric McCormack's going to do after Will & Grace either. He's got a wedding ring, but his shirt doesn't match his pants, which means his wife has stopped caring. Gotcha! [to Achmed] Oh, man, another spot on my tie! It's like my wife doesn't even care anymore. I'm sorry. You shouldn't have to listen to my complaints. It's not like you could relate.
Achmed: Actually, you might be surprised. My wife and I haven't been getting along for quite some time now. It's like she's no longer the woman I traded goats for, you know?

Bullock: His name is Achmed al-Paula Abdul al-Paul Anka al-Casey Kasem bin-Shakira. We must find out who he works for.
Stan: Leave it to me, sir. I'll crack him faster than Condoleezza Rice cracked the glass ceiling with her beautiful, straightened hair.

Stan: I'm home.
Francine: Oh if I had known you were gonna be home so early, I wouldn't have taken care of myself in the bathtub.

Repo Man: Here to repo the cars.
Steve: You can't do that - we're about to become men!
Repo Man: Well, you may have planned on becoming men through sexual conquest, but an equally valid preparation for adulthood would be a night filled with disappointment and compromise.

Retrieved from "https://americandad.fandom.com/wiki/Failure_is_not_a_Factory-Installed_Option/Quotes?oldid=87505"
Community content is available under CC-BY-SA unless otherwise noted.