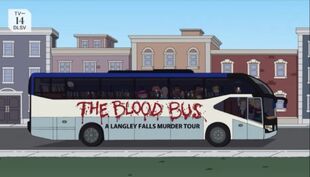 Roger's Disguise: Non-Standard Opening / Mr. Tavarelli from "The Census of the Lambs" 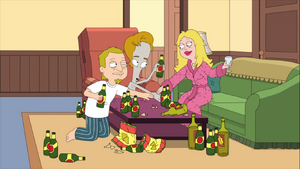 While watching Police Academy, Jeff and Hayley catch a news report about an 'RB Burger' killer on the loose. Hayley explains to Jeff that with her extended-work hours, she plans on doing more for the family and buys him a wedding ring. While showing it off to Roger and Francine the next day, they all complain about being treated badly because they don't earn cash and decide to go into business for themselves by buying a tour bus. When they get teased by Stan, Steve and Hayley, they decide to center their tours around the murders. To get money for gas and necessities, Jeff pawns his ring. 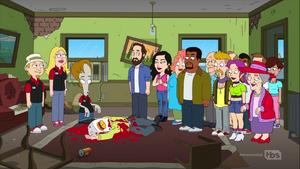 Their inaugural tour goes poorly, and is complicated by a Yelp reviewer. Desperate to perk things up, they grab some police band radios from RadioShack and are rewarded by a fresh murder. But when everyone re-boards the bus, they find they have an extra passenger in the form of the killer. Torn between losing their review or saving the passengers, they allow the killer to lead them to a sewer where he reveals his kills are intended to bring back a long-vanished temporary menu item. After nearly killing both Roger and Jeff, Francine manages to disarm him as the rest of the passengers get to live out their Dexter fantasy while taking out the killer as the trio slip away. When Jeff is forced to admit that he pawned his ring to Hayley, she surprises him with having retrieved it as the news reports that due to the stoppage of murder victims, RB's is bringing back the menu item the killer desired.