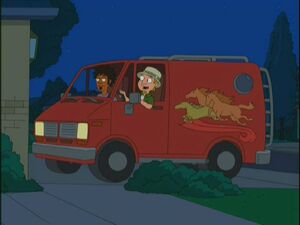 Exmack is a friend of Jeff Fischer that appears with him in "Bush Comes to Dinner". They show up at the Smith house when they can't get a drink and want to borrow Hayley's "special flask" of booze, proving to Stan that she had been drinking. He later appears in the class that Hayley poses nude for in "Meter Made".

He is also among the Groff Community College students that Stan pepper sprays in "Big Stan on Campus". He is also on campus in "Pride Before the Fail".

He watches Roger play basketball in "Criss-Cross Applesauce: The Ballad Of Billy Jesusworth", appears as one of the residents of Ragi-Town in "The Enlightenment of Ragi-Baba", at Roger's Burning Man in "Camp Campawanda", in the Shark's Nest in "The Long Bomb", as a student in the gym of Pearl Bailey High School in "Kloger" and in the talent show audience in "The Talented Mr. Dingleberry".

He is in attendance of the Harlem Globetrotters basketball game in "Klaustastrophe.TV" and runs a stand at the farmer's market in "One Fish, Two Fish".

Retrieved from "https://americandad.fandom.com/wiki/Exmack?oldid=87942"
Community content is available under CC-BY-SA unless otherwise noted.