Every Which Way But Lose 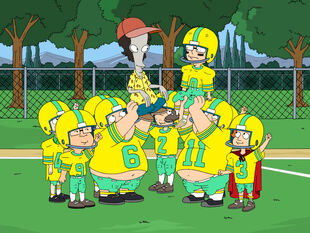 Every Which Way But Lose
Steve plays junior football for Stan.

Plot: Stan is watching a Washington Redskins football game on TV at home with Francine when Steve comes home with a platinum medal from a chemistry competition at school. Francine congratulates Steve on his accomplishment, but Stan asks if that means that Steve came in first. Steve says no; he came in 78th, since platinum is number 78 in the periodic table. As a result, Stan ignores Steve, calling him a loser. 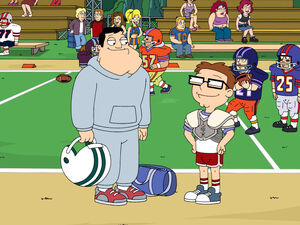 To regain his dad's respect, Steve attempts to join a junior football team. However, when a hyper-competitive Stan assumes the position of head coach, he kicks Steve off the team for not being good enough. Back home, Steve, crying, tells Roger what happened. This infuriates Roger since Stan had also made him cry multiple times, and he convinces Steve to help plot their revenge... namely, making Stan cry.

Steve and Roger recruit a new team of misfits to threaten Stan’s perfect season. Roger reasons that if Steve's team can beat Stan's, Stan will have no choice but to accept the loss and cry. The game, however, starts off very one-sided in Stan's team's favor, and only by covering Steve with a slimy substance excreted by Roger does Steve's team finally win. Unfortunately, instead of crying, Stan attempts to kill himself, unable to live with a single bit of failure. 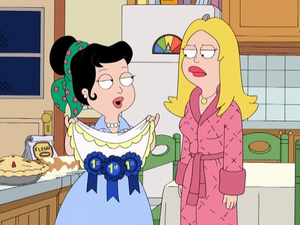 Meanwhile, Francine is desperate to win the blue ribbon for a pie at the Langley County Fair and has Hayley and Roger eat many pies, refusing to stand for their assessment of "Fine". She loses every year to a mysterious competitor, Carlotta Monterrey, who never shows up at the fair. Later, at night, she discovers that Carlotta is actually Hayley in disguise. However, at the fair they both lose to Roger, who had been secretly competing against them for years.

To cheer Stan up, Steve takes him to the fair and goes to the "Balloon and Dart" carnival game. Stan tries to win and threatens suicide when he doesn't. In a passionate speech, Steve convinces his dad to accept the loss. Stan finally breaks down and cries, feeling an overwhelming sense of relief when he does so, and tells Steve they must be bonding in a father-son moment. Steve reacts by punching his dad in the groin and telling him "quit ruining it!", the reverse of an earlier gag where Stan did the same thing to Steve.

Previous Episode /// Every Which Way But Lose \\\ Next Episode