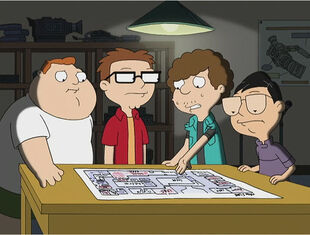 Escape from Pearl Bailey
Steve tries to avenge Debbie but raises the ire of the entire school.

Roger's Disguise: Rashid the Persian from "When a Stan Loves a Woman" 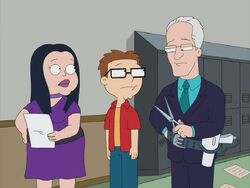 Steve gets back together with his ex-girlfriend Debbie, making his friends jealous. Meanwhile, Lisa Silver is running for Student Council President, though she is clearly corrupt. Steve tries to persuade Debbie to run against her, which she accepts after learning that Lisa spent the school's money for fetal pigs on hiring a Hollywood hairdresser and a live buffalo. Steve works extremely hard to get support, neglecting his friends. Though Debbie seems to be winning, someone posts a slam page and she loses. 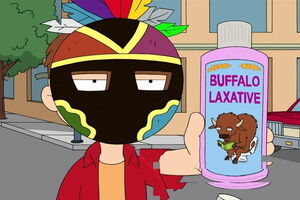 Steve determines that it was Lisa and her friends and executes an elaborate revenge scheme financed by pawning Toshi's family katana. Using a mask, Steve exacts his revenge on the cool girls in a parody of Navajo Joe. On Amy, he has a buffalo excrete on her, with laxative; Janet, having her left leg filled with fat during her liposuction; and last Lisa, infecting her with oral herpes by giving her teddy bear to a prostitute and then letting her smother the bear in her sleep. However, Debbie is horrified at his actions and dumps him. Steve later learns that his friends posted the smear page, as he was spending a lot of time with Debbie and they wanted him back. This backfires on the three as Steve rails at them, telling them that their friendship is over and Steve attacks Snot. At this point, Lisa and all the cool kids learn that Steve was the culprit, having traced his purchase of the mask, try to beat up Steve and his friends. 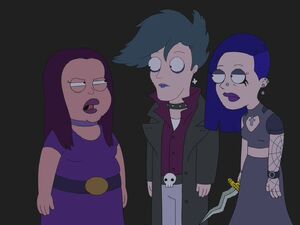 As Steve and his friends try to escape from the school, Principal Lewis abuses his power and makes an announcement to the various cliques in the school to catch them, offering a $500 dollar reward. They get past some of the cliques, but when they stumble into Goth territory, Debbie tells her friends to let Steve go, understanding why he did what he did. But her Goth friends were going to turn Steve's friends to the popular people, so Steve decide to go with them but Debbie decides to let them all go. They distract the other cliques by dancing in their way. They make it outside, but the cool kids cut them off from Francine and they get cornered in the school bus. They leap out of the bus to go out in a blaze of glory; as the screen freeze-frames, we hear Steve shouting "We're not taking any of them with us!" along with the sound of several punches landing at once.

Retrieved from "https://americandad.fandom.com/wiki/Escape_from_Pearl_Bailey?oldid=91401"
Community content is available under CC-BY-SA unless otherwise noted.