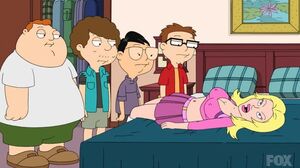 Erica is Mr. Yoshida's sex doll that the boys find when playing "Hide and go pee" in "May the Best Stan Win". Mr. Yoshida allows them to take the doll to remake the movie Mannequin to get them out of the house. When Roger overhears, he decides it is more interesting than the goings on between Stan and Francine and disguises himself as a director to take over the production, changing it to the movie The Goonies. Frustrated with Roger's directing and forgetting the treasure map is fake, the boys want to quit but Steve rallies them...until Roger steals the map and Erica again.

Retrieved from "https://americandad.fandom.com/wiki/Erica?oldid=62985"
Community content is available under CC-BY-SA unless otherwise noted.