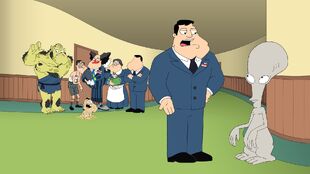 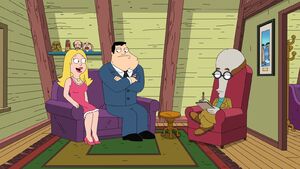 When Francine has a sexual dream about Jeff, the family enjoys a good laugh over it except for Stan, who is highly upset. He attempts to keep her from sleeping but she finds out and puts a stop to it. As he worries about what she is dreaming, Roger demonstrates that he has the power to enter dreams and offers to take Stan along on a tour of Francine's. There, he discovers that she sees him as a baby, so he tries to put on a macho act, but when he cuts himself while carving his own steak, he passes out as he tries to slap his penis on the table. Entering another dream, he finds that he appears as a buffoon to her, as well as a host of other personalities. He decides he is going to confront her, but is pulled out by Roger and told he can never interrupt someone dreaming. Francine overhears this conversation and becomes upset with him. But after a bad dream of his own, he goes in yet a third time with the intention of making the bad personalities look good. But when he gets caught by Francine in her dream, he tries to keep the musical number going, but accidently kills one of her personas. Finding out that they can be killed, he decides to kill off all of his uncomplimentary personas, but this results in his vampire-like insecurity becoming even stronger and breaks out though Roger into the real world as Francine vanishes in anger. 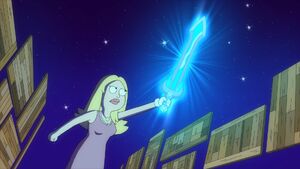 Awaking the next day, Stan finds out from his insecurity that Francine is trapped in her dream world and they make a deal to recover her. They find she has been bouncing around from one person's dream to another, but Stan's insecurity gets on Stan's nerves, so he ditches him and returns home. He finds that Steve has been dreaming of Francine, so he is able to catch up with her through his dream, but Stan's insecurity arrives to kill Stan and take his place. To remove the power of his insecurity, Stan summons a dream Jeff and proceeds to have sex with it, allowing Francine to kill his insecurity. Steve awakens from his weird dream to find he has been given an octopus body from Francine's dream world.

In between of dealing with Stan, Roger and Klaus struggle to come up with a name for his hot sauce, as his 'Dr. Buttblast' persona's name is already taken by another brand. When they find success with a name and artwork, Roger nearly closes a deal with Frank's Red Hot, but is interrupted when Stan finds out that Steve has dreams of Francine.

Retrieved from "https://americandad.fandom.com/wiki/Enter_Stanman?oldid=92715"
Community content is available under CC-BY-SA unless otherwise noted.