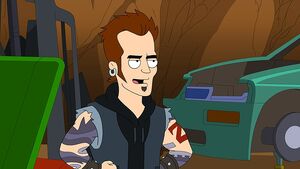 Enoch is the leader of the Appalachian Trail Chop Shop Candy Gang, commonly known as the Zagnut Boys. He is notable for an obsession for Zagnut candy bars.

When Klaus, who has put his brain into the computer system of Stan's SUV when he refused to pay for life-saving medical treatment in "A Nice Night For a Drive" takes revenge by leaving Stan on a mountaintop, he stops to pick up a woman hitchhiker and finds he has been carjacked when two more thugs enter. Stan follows and uses a motorcycle jacket from the gang's bikes that are left outside and steals what is left of his SUV, but finds they have already removed the computer system. Driving back and smashing the SUV into gas tanks, Stan manages to steal back the system and takes it to the CIA, where Klaus is restored to a fish body.

Enoch is voiced by Walton Goggins.

Retrieved from "https://americandad.fandom.com/wiki/Enoch?oldid=72241"
Community content is available under CC-BY-SA unless otherwise noted.